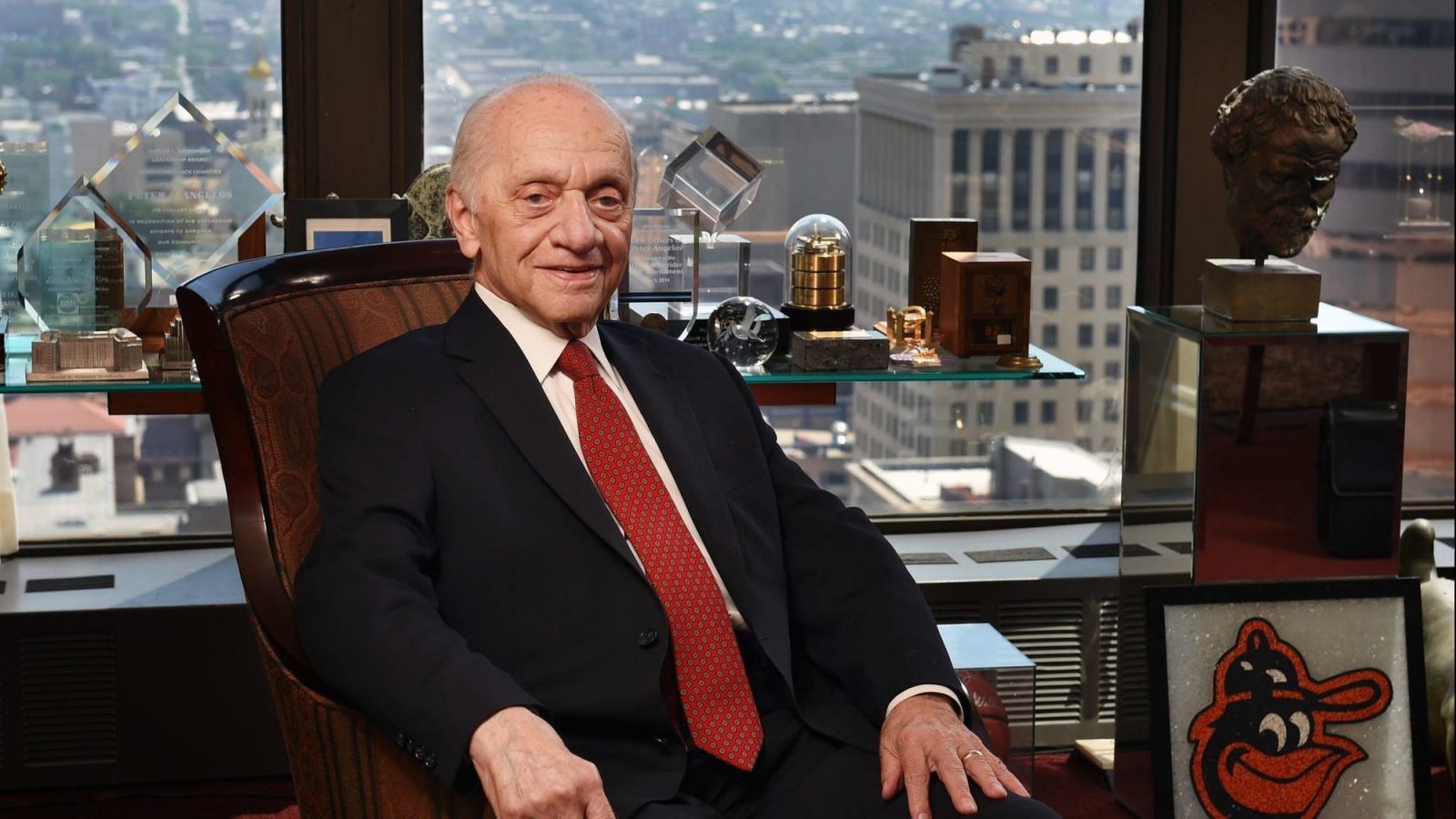 Peter Angelos was born on July 4, 1929, in Baltimore. His parents were John Angelos (a bar owner) and Frances Angelos, who immigrated to the United States from Karpathos, Greece. Peter Angelos married Georgia Kousouris in 1966, and they had two children together, John and Louis.

Angelos’ family lived in the working-class neighborhood of Highlandtown and lived in a row house. Angelos’ father owned a local tavern and mostly spoke Greek at home.

Peter Angelos wanted to be a politician, but he didn’t get very far. Though he was briefly elected to the Baltimore City Council, voters rejected his bids for Maryland’s state senate in the 1950s and for mayor in the ’60s. But Angelos remains a politician at heart. The former criminal defense attorney has been called the “most powerful private citizen in Maryland.” And as his campaign contributions and court cases demonstrate, his reach extends far beyond his home state.

Angelos has refashioned himself as an attorney to the little guy, representing consumers and workers in class-action suits against the likes of Philip Morris and Motorola. The turning point in his career came in the early 1980s when labor leaders cajoled him into accepting a suit on behalf of asbestos workers. Within a decade, asbestos had made Angelos a very rich man. His firm has reportedly made more than $100 million on asbestos rulings alone, and still handles as many as 500 cases each year.

His profile as a class-action litigator and his fees have since skyrocketed. As Maryland’s lead counsel against the tobacco industry, he signed on for a 25 percent fee — which turned out to be nearly $1 billion. (The state has since held up payment, arguing that Angelos’ take was simply too large.) Angelos has also sued manufacturers of lead paint and the diet drug fen-phen and is currently representing a man who claims that using a cell phone gave him brain cancer. The suit, which seeks more than $800 million in damages, worries cell phone providers like Motorola and Verizon Wireless. Though similar suits have failed, RCR Wireless News notes that the industry “has never faced a lawyer with the expertise, financial resources, and political firepower of a Peter Angelos.”

Angelos, who led a group of investors that purchased the Baltimore Orioles in 1993 for a then-record $173 million, wields considerable financial and political clout at home. When he wants something from state lawmakers, the measures he supports are referred to simply as “Angelos bills.” The state assembly gave lawyers like Angelos more time to sue by extending the statute of limitations on asbestos cases; the measure was sponsored by state Senator Norman Stone Jr., who later accepted a position with Angelos’ firm.

The assembly also created more judgeships to speed asbestos cases along; the bill passed after Angelos brought Orioles’ superstar Cal Ripken Jr. for a photo opp with state legislators. “The idea that one person could provide all this major legislation has been amazing,” House Minority Leader Robert Flanagan (R) told the Baltimore City Paper.

“If you’re convinced it’s the right

thing to do, move forward”

Angelos has extended his reach to international issues. In 1999, he became the first professional baseball owner to orchestrate a game with Cuba, reportedly securing a State Department waiver for his team’s trip to Havana following a White House meeting with then-National Security Advisor Sandy Berger.

He also drew the ire of Republicans last May by refusing to sign Cuban defectors to his ball club. Senator Jesse Helms (R.-N.C.), not known for his opposition to discrimination, demanded a federal probe of the Orioles to safeguard the rights of “Cubans who manage to flee the repressive regime of Fidel Castro.” Jim Nicholson, chairman of the Republican National Committee, also expressed outrage that Angelos would “turn a blind eye to the atrocities committed by Castro’s totalitarian state.”

Republicans have other reasons to dislike Angelos. The trial lawyer has denounced GOP efforts to limit jury awards against corporations that harm consumers or workers. “I am opposed to a party which indulges in lawyer-bashing irresponsibly in order to collect campaign contributions from corporations,” he has said. During the last election cycle, Angelos and his wife, Georgia, gave all of their donations to Democrats, including like-minded congressional candidates such as Michael Ciresi, one of Minnesota’s tobacco lawyers, and Edward O’Brien, a steelworkers union official from Pennsylvania.

Angelos makes no apologies for the controversy his influence generates. “Whenever you do something unconventional, there will be protests and honest disagreements,” he told Business Week. “If you’re convinced it’s the right thing to do, move forward.”

Any cookies that may not be particularly necessary for the website to function and is used specifically to collect user personal data via analytics, ads, other embedded contents are termed as non-necessary cookies. It is mandatory to procure user consent prior to running these cookies on your website.