The Enduring Appeal of Greece’s Temples to the Gods

“We’re all Greeks. Our laws, our literature, our religion, our arts have their root in Greece.” – Shelley

For many people all around the world, ancient mythology constitutes a first connection to Greek culture. Whether from illustrated children’s books, animated films, or even history textbooks, lots of children learn early on about the gods of Olympus, and the various stories that intertwined them with the ancient classical world.

This foundation of knowledge alone would likely make the lingering ruins of temples to the Olympian gods favorite destinations for a lot of people visiting modern-day Greece. Even beyond the lore we learn in childhood, however, it’s worth noting that the age of classical mythology has been having something of a moment in the last 10 years or so. Across mediums, there has been a revival in interest in Greek gods and heroes that goes well beyond illustrated books and animated films.

It begins in cinema, where a few different films over the years have brought some of the most prominent Greek gods to life. Projects like Troy and 300 treated the gods as active influences in ancient wars, but it was slightly later — with the releases of Clash Of The Titans and Immortals — that we really saw the gods as characters. Immortals especially marked a striking modern take on Olympus, despite the fact that it was not a particularly good film. Roger Ebert’s review called it “the best-looking awful movie you will ever see,” which is a harsh but fitting description. But the look of it was irresistible. Immortals showed figures like Zeus, Athena and more as beautiful figures, almost glowing with gold and living in utopian isolation. It was enough to get anyone interested in the Greek myths all over again.

Gaming has also played a role in the enduring hold Greek mythology has on so many of us. Console games like those in the God Of War series and Assassin’s Creed: Odyssey have regularly invoked the gods and brought aspects of the classical world to life in vivid detail. Mobile games like Gods Of Rome have done the same. But it’s the online casino category that has arguably had the biggest impact in this regard, given the reach of casino gaming in general. Most sites today will have at least one or two slot arcades that involve Greek mythology, but the games selection on Foxy Bingo really shows how prominent this theme is. Foxy makes a particular effort not to showcase its own games but to collect the newest and most well-liked slots from across the internet. And in doing so, it’s gathered numerous games about the Greek gods and heroes, including War Of Gods, Hoard Of Poseidon, King Of Olympus, and a whole series of Zeus games. The prevalence of these characters and themes speaks to how many people — even among gaming adults — are still attached to the ancient myths.

Even beyond film and gaming, we have also seen a spattering of books in recent years that have helped to renew interest in the Olympian myths. The most prominent is the Madeline Miller novel Circe, which essentially turns a fringe mythological character into a boldly reimagined protagonist. The book centers on said character (Circe), but also transports the reader to a land of gods and heroes in a way few modern literary works have ever managed. The book isn’t alone, either. Other recent works like Lavinia by Ursula K. Le Guin, Miller’s own The Song Of Achilles, and to some extent Piranesi by Susanna Clarke have also built on ancient Greek and Roman myths to the delight of countless readers.

Through all of these sources and more, the tales and figures of Olympus have remained fresh in the minds of millions, long after any childhood fixation on mythology. And it’s for this reason that we want to highlight the fact that there remain numerous opportunities for travelers to visit the remains of temples to the gods of Greece. For those who are fascinated by all of this history, or who have had their appreciation for the Greek myths awakened again by all of the recent entertainment and culture mentioned above, the following landmarks and destinations are not to be missed on any grip to modern-day Greece.

We’ll begin with the most famous attraction in all of Greece, which was in fact built as a temple to Athena (and once housed a magnificent statue of the goddess). People visit the Acropolis simply to get a glimpse of ancient history and imagine Athens in its classical prime. But this is first and foremost a monument to the ancient gods. 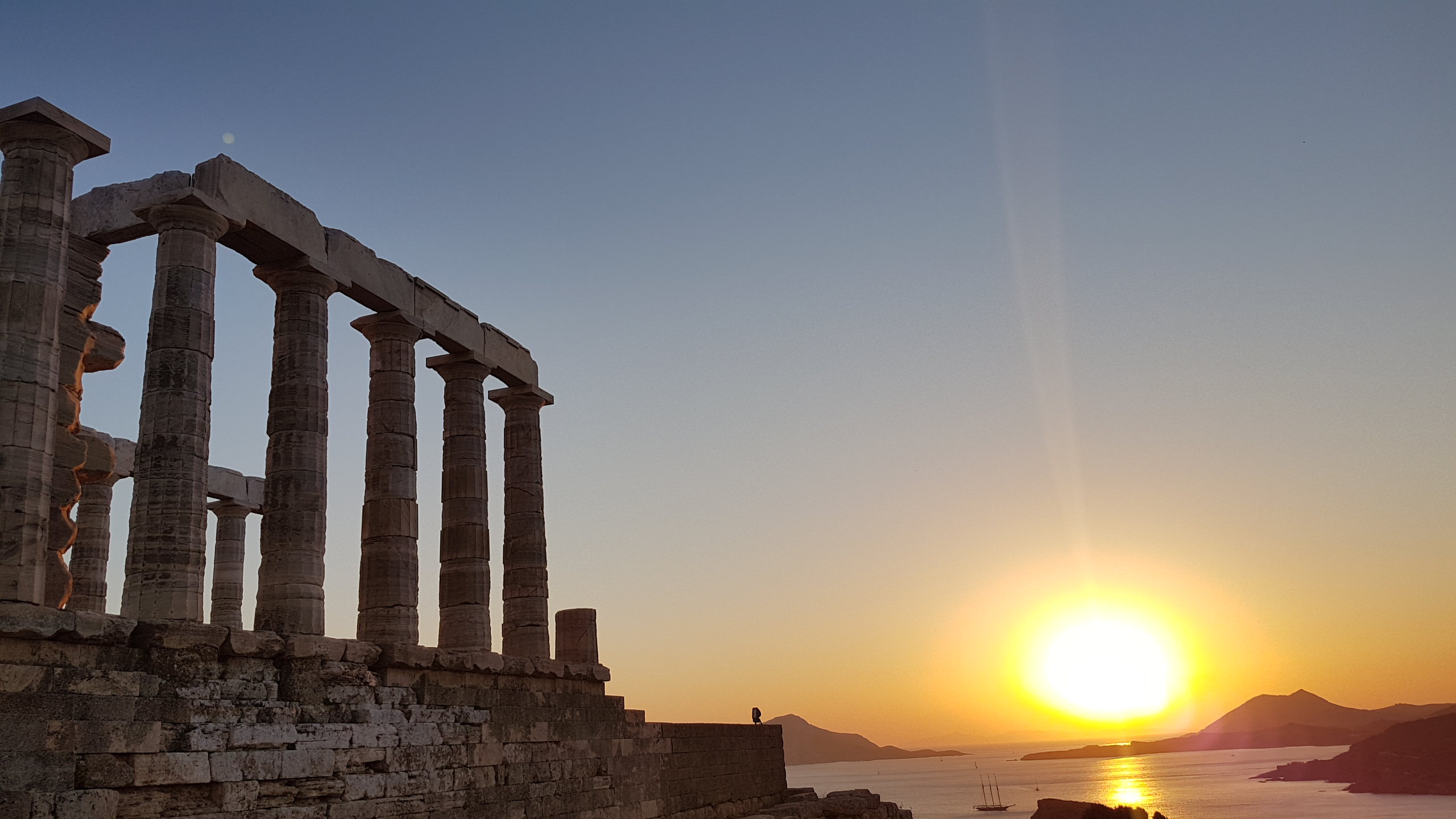 The Temple of Poseidon at Sounion.

The Temple of Poseidon

The Temple of Poseidon overlooks the sea at Cape Sounion, where it has stood for nearly 2500 years. While not quite as whole a construction as the Parthenon, it’s in remarkably impressive shape for its age. And its position on a cliffside over the water is simply breathtaking.

The Temple of Apollo Epicurius, at Oichalia, Messenia.

The Temple of Apollo Epicurius

Located in the mountains at Oichalia, in Messenia, the Temple of Apollo Epicurius is actually a very well-preserved ancient structure, dating back to roughly 450 BC. It doesn’t quite match the grandeur of the Parthenon, but it comes closer than most ruins, and is also admired by historians for being somewhat unique in its construction. Unfortunately this particular temple also requires more protection from the surrounding elements, and is thus sometimes partially hidden from view. 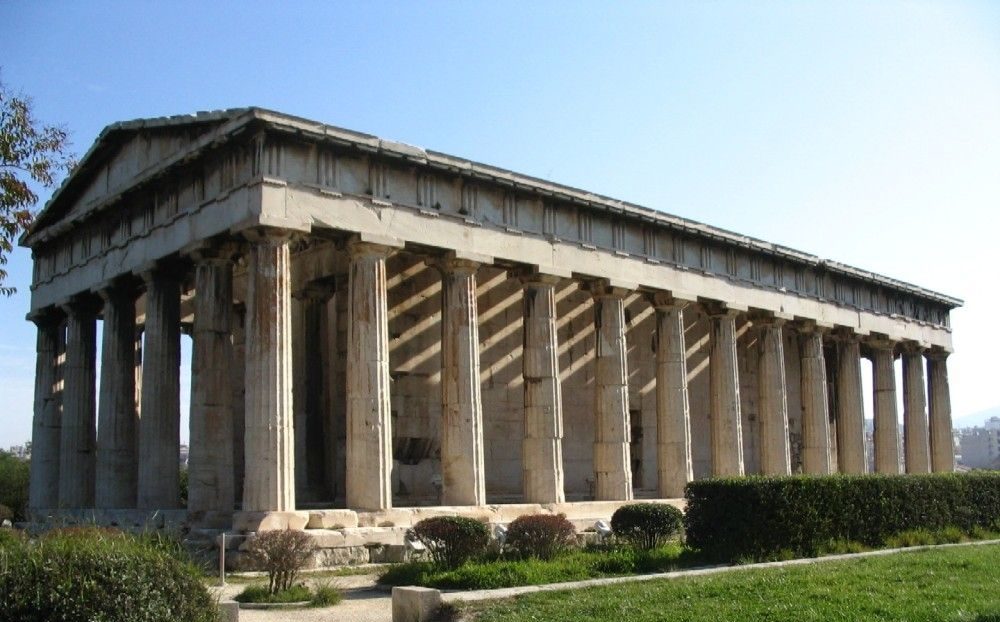 The Temple of Hephaestus in Athens

The Temple of Hephaestus (or Hephaisteion, also Hephesteum)

This monument to the Greek god of masonry and metal working is an absolute gem to some tourists, simply because it’s remarkably overlooked. It’s located in Athens, we know it to have been designed by one of the same ancient architects who brought the Parthenon into being, and it’s in even better shape than the Parthenon now! And yet, because it does not stand atop the Acropolis (and perhaps because Hephaestus is not as well-known as Athena), it’s possible to visit Athens and never see nor hear of it. Visiting the temple in person is an incredibly humbling experience however, just because of how well preserved it is. 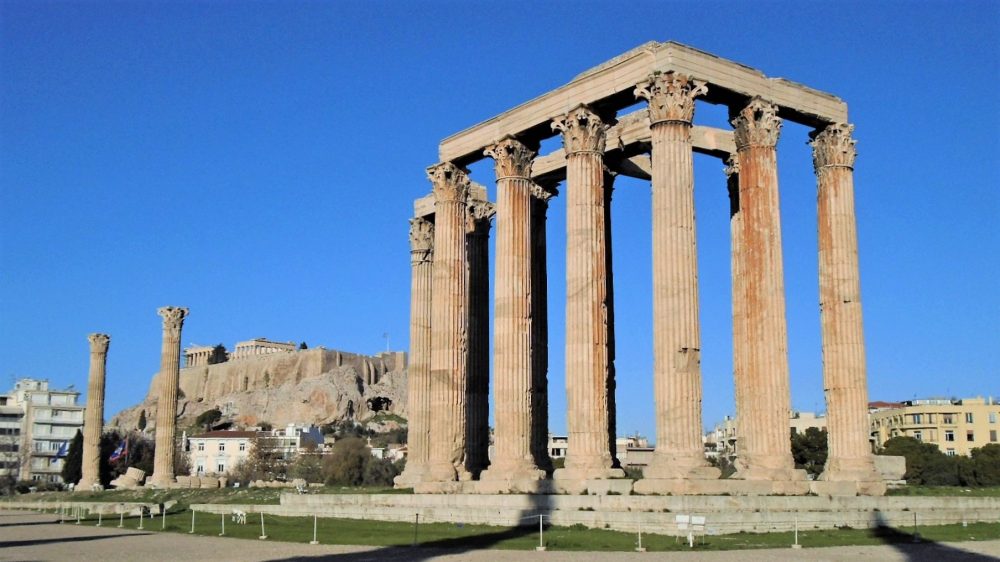 The Temple of Olympian Zeus in Athens

The Temple of Olympian Zeus

Finally, there’s the Temple of Olympian Zeus in Athens, which unfortunately is now little more than a clump of columns. Nevertheless, it’s incredible to see in person. The columns are massive, and provide a clear idea of what a large and impressive temple this once was. It’s also a particularly fascinating temple from an historical perspective, given that its construction was started by Athenian rulers in the 500s BC and finished by the Roman emperor Hadrian centuries later. It’s an interesting nod to the shared mythologies (or at the time religions) between the Greek and Roman worlds.

All of these temples make for remarkable stops on a visit to Greece, and always have. But given the resurgence of Greek mythology in modern culture, it seems that even these ancient structures may now hold a sort of renewed significance. To see them in person on a trip to Greece is as close as one can come to stepping into those myths and walking amongst the gods.